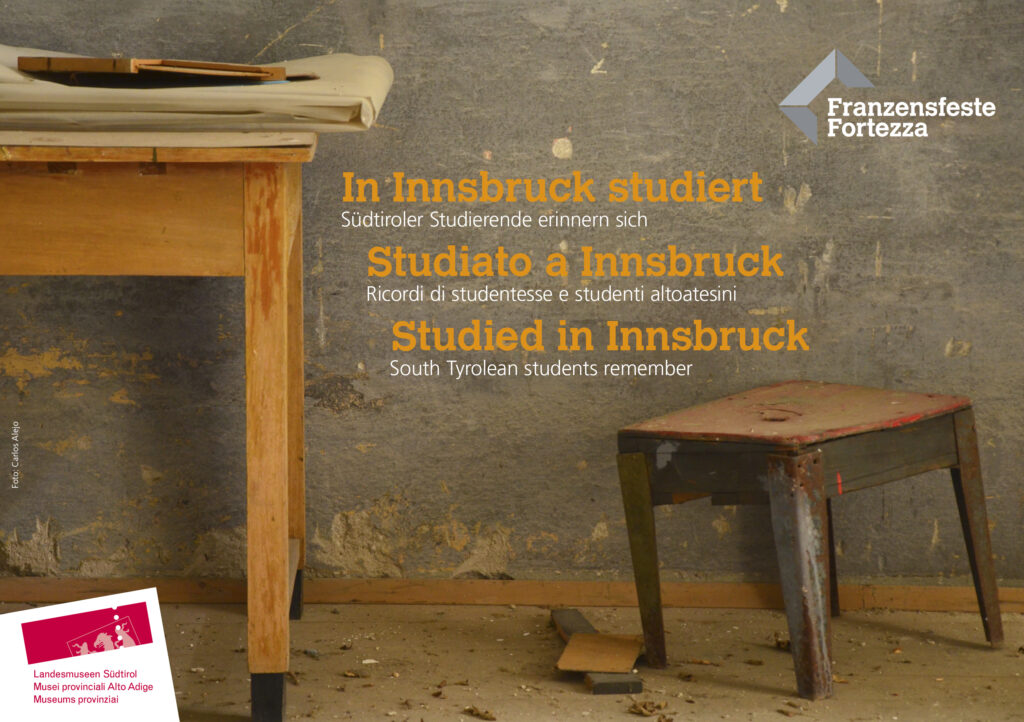 Stories, objects and thoughts in memory of time spent studying in Innsbruck, homage to the University of Innsbruck on the occasion of its 350th anniversary.

The enduring popularity of the University of Innsbruck among students from South Tyrol – of the current 12,500 South Tyroleans studying in Italy and Austria, some 3,600, i.e. just over a third, are at the University of Innsbruck – is now being marked by the Provincial Museum located at the fortress of Franzensfeste, which will be hosting the special exhibition “Studied in Innsbruck. South Tyrolean students remember”. Students’ personal objects and memories were collected over a six-month period with the help of media campaigns and word-of-mouth advertising. The substantial response led to some 40 “objects” being selected which, together with their stories, offer a very particular representation of student life in Innsbruck.

Divided into 15 rooms and themes, the exhibition is a collection of objects, stories and thoughts that highlight the formative events of the history linking South Tyrol with the University of Innsbruck. Themes include Crossing the border and Living differently, Passing exams and Woman power, Living the community and Graduating with honour(s), with a wide variety of memorabilia in support. From the photo of the weekly communal washing-up in the shared kitchen to a statement about political activity by the chair of the body representing South Tyrolean university students; the bag with which food was smuggled over the Brenner Pass and the preparation for a Ladin spider species; or the museum loan of a Bronze Age winged axe discovered by a student and the diary of an archaeological expedition to Iraq – there is a host of items from the depths (and shallows) of memories and attics.

The oldest document on display is the diploma certificate of Maria Huber from Pfunders, who completed her training as a midwife at the Medical Faculty of Innsbruck in 1897. The youngest participant was Ania Viero from Bozen, born in 1996, who was regional champion in the 2018 Poetry Slam and is in her fourth year as a student teacher in Innsbruck. Her video performance of Anonyme kinderabhängige Eltern [child-addicted parents] in the first room gets the exhibition off to a fine start. The rest of the exhibits invite visitors to remember their own years of study as well as referencing reports and clichés of student life, all with the aim of raising a nostalgic smile.